Am I Playing Football Manager Wrong?

I love football, I love the World Cup and I love gaming. So obviously, I love Football Manager.

But the problem is even though I consider myself to be pretty good at the game, I watch some streamers play it on Twitch and feel like we must be playing a completely different game!

I rely heavily on my scouting network to judge the suitability of players. I search for them manually or bring in released players on trials to check. But ultimately I make my decisions based largely on the ‘star ratings’ assigned by scouts and coaches and I spend more time ensuring my staffing setup is as good at this as possible, rather than looking at the raw attributes of players.

But these pros on Twitch - namely ZeaIand - play the game in a completely different way. He finds players based purely on their stats. He still gets them recommended by his in-game staff but then looks at their profiles, analysing the type of player they would be and their subsequent fit into his team based on the numbers on the screen. 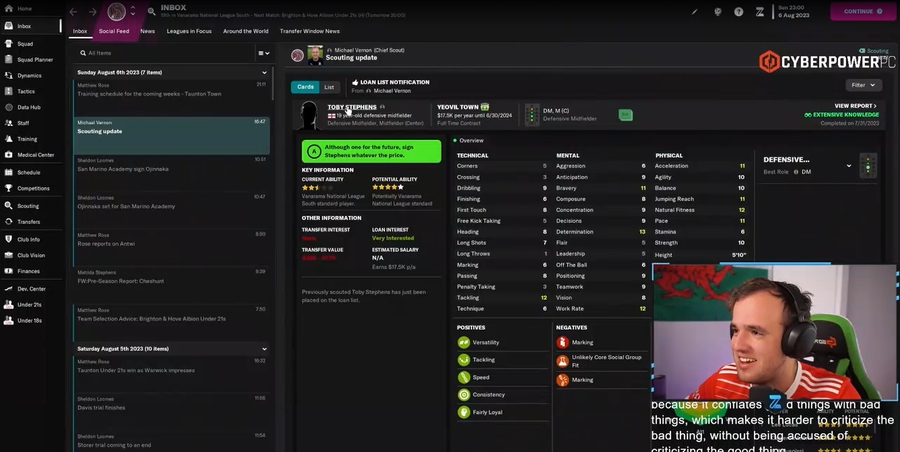 I’ve seen him look at a player for five seconds before declaring they are intelligent! But there isn’t an intelligent stat in the game!

The more I watch, the more I realise that this isn’t just an intuitive thing. He has worked at this, learned the system and mechanics of the game and then found players that fit criteria he has established.

Anyone could learn Zealand’s approach with deliberate practice. He’s absolutely doing it the optimal way, finding players who can slot into his team’s style and improve them as cost-effectively as possible.

Maybe - let me console myself - this doesn’t mean there is anything wrong with the way I play. I still enjoy it and get a lot out of trying to develop tactics that can work with the players at my disposal. Playing for enjoyment’s sake is completely valid.

But ZeaIand’s approach is definitely more, should I say, grown up or ‘real’? So much of modern life is data driven. Being able to analyse and make judgements at a glance is invaluable to running a productive, effective life - and in the world of work, it would be absolutely invaluable to an employer too.

How you play a game, not just what you play, seems so relevant. Relevant to life. Relevant to work. Relevant to, well, my views about ZeaIand and frankly, whether I decide to buy FM23.